I remember a time back in the ’90s when tech networking events were filled with geeks and nerds, and very few women. I was a member of the Venice Interactive Community (VIC) which had monthly meetings at an old Victorian house on Main Street in Santa Monica. As a single woman, those tech events were great as there was always a bevy of single, smart men. So, they were a little pale and many wore glasses but they could fix my computer at a moment’s notice.

Times have changed, or at least that was not the crowd at the LA Twestival on September 13. First off, the venue was much more hip. The event was held at Level 3, a nightclub located in the trendy and fashionable Hollywood & Highland Center. For those not in the know, Hollywood & Highland used to be a dumpy little corner on Hollywood Boulevard until they turned it into a mall with a hotel and venue attached. (And not just any venue either, the Kodak Theater which has hosted such prestigious events as the Academy Awards and the American Idol finals.) So, that was taking the geeks out of their element, or was it?

When I arrived, a couple of civilians were trying to get into the club but were stopped because they didn’t have tickets. I immediately felt cool as I waved my “ticket,” a downloaded piece of paper that I’d purchased online that morning, at the security guard and breezed right in.

Twestival Local is actually a charity event that was taking place at venues all over the country to raise money for locally chosen charities over the weekend of September 10. The tickets were $20 or $50 or more if you wanted to be generous. They also had tickets on sale for $12 and $15 on the day of the event. As far as I could tell, there was no difference in the price of the tickets except for the amount of your tax deduction at the end of the year. 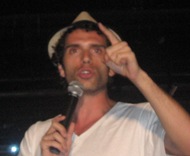 The event started at 6 p.m. but I didn’t get there until a more happening time of 8:15. Since it was supposed to run until midnight, this seemed to be perfect time to arrive. Strangely, considering the hype, the event was not packed or even close to it. When I arrived there was a really lame stand-up comedian bombing on stage, which was odd because there was a huge dance floor in front of him and people standing around to watch him. Much further back, from a booth, a heckler was giving him a run for his money but the comedian couldn’t even hear him. He just kept yelling, “What?”

Then I noticed what made this event really different. As I looked across the dance floor, I saw more than half the crowd standing around and twittering from their phones. They were in the presence of actual people, but the allure of Twitter was too great. Above the dance floor were two large screens that were broadcasting tweets about the Twestival and people were watching the screens for their tweet and taking pictures of the screens too.

“Wow,” I thought. “Are these guys geekier than we were?”

And then I noticed the retro punker next to me. He introduced himself to me: @Mickey_77. Really, no name, just a twitter handle. Then I asked him what he did.

What’s an alternative model, you’re asking? Well, he’s pretty much paid to look like a punker. It was already his style but now he’s getting paid to model like that. What does an alternative model look like? Well, he had longish, shaggy, jet black hair (teased up in the back), silver rings on every finger, wearing all black with a big skull & crossbones on his shirt, and a low slung silver studded belt I think I had in the ’80s. He was a really nice guy and so when he walked away I found myself glad that there is one less person on unemployment. Plus, his ghostly pallor reminded me of the tech geeks of the past. 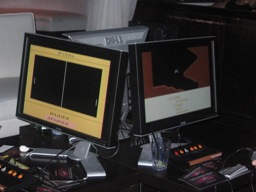 One of the attractions at the event was an area with old Atari consoles set up to play. I sat down and met another of the new tech generation. Josh Highland looked as though he too could have been an alternative model with his large black earrings and fully tattooed arm but he was actually a web designer. He had come in from the Inland Empire where he declared their Twestival to be lame. One upside to this new crowd: when I gave him my Twitter name, he immediately signed up as a follower. Instant networking. We were both trying to boost our twitter followings but he is much more serious about it than I am. He told me that if he gets 20,000 twitter followers, he will get a “sizable tattoo of the twitter ‘Fail Whale.’” He even has a Web site promoting it.

Why 20,000? “When I picked 20k, it would have placed me in the top 100 Twitter users. Since then that number has changed due to twitter’s popularity.”

When I asked him what he thought of the guy that was going to name his kid Batman if he got 500,000 Facebook fans, he said, “Getting a tattoo is one thing, that’s my body. Naming a kid is a whole different level. Besides, my wife would never go for it!”

No matter how long it takes, when he reaches that goal, he’s in the tattoo shop. His current following is 3,764.

My last stop was a trip to the Girl Gamer pavilion where I met the lovely Alexandra Mokh, co-founder and community director for Girl Gamer. They set up a nice corner of the room with the perfect techie treats: mini candy bars and tortilla chips. But their clan of women was definitely throwing off the usual ratio of men to women. Besides girl gamers that looked like models (such as Alexandra herself), there were also booth babes. And they weren’t there working, they were networking! Who knew that booth babes have business cards? By the way, they are officially called “promotional models” not to be confused with “alternative models.”

Actually though, if you could get past everyone tweeting, most of the people were pretty friendly. There was only a small crowd that stood around exclusively tweeting. So, maybe the geek factor is still there but just more fashionable and/or anti-social than before.
All photos by Tracy Bagatelle-Black