Instead of my usual harsh judgment (my hammer of knowledge, if you will), this week I bring you a question. It’s an issue on which I’ve been waffling for some time.

Backstory: Remember a few weeks ago, when Starbucks released their new instant coffee? Well, now Nestle’s Taster’s Choice would like to remind you that they’ve been making instant coffee way before that young Turk ever came into the java-slinging world. Here in New York, and in several other cities, Nestle street teams have been handing out little envelopes filled with all sorts of Taster’s Choice instant coffee packets. Copy on these envelopes calls out the Starbucks instant brand as a lot of needless hype.

(I know; the irony of all this is that instant coffee is, as far as I can tell, almost universally reviled. I’m drinking the Nestle samples as I type this and I can tell you I’d much rather drink motor oil. But to be fair, I thought the same of the Starbucks samples that were being given away during their big promotion. Fighting over which brand of instant coffee is best is akin to arguing over what sort of natural disaster one would prefer.)

But here is the copy on the Taster’s Choice envelope that caught my eye. 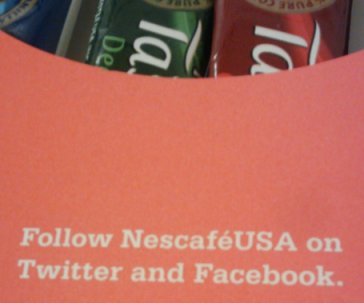 I’m of two minds when it come to copy like this.

The marketing-y, branding-y, PR-ish part of me knows that Taster’s Choice must have an important social media component to this promotion, and if they didn’t include that piece of copy, they would have missed a huge opportunity. How else are they supposed to convert instant coffee drinkers to their brand? How else will they galvanize their Nestle army into spreading the word?

But the User in me (the part that laughs at xkcd comics) hates this copy. As a consumer, I scrunch my nose at this copy and say O RLY? Roughly translated: “Do you really expect me to sit down at my computer or flip open my smart phone, pull up the Twitter or Facebook homepages, search for NestlecafeUSA, and then follow or fan it?”

“You’ve given me no hyperlink to click!” is what this part of me yells.

I’ve heard whispers of “real-time hyperlinks” coming to at some vague and scary future time. The idea is that with a little applied technology (a barcode for your smartphone to scan, say) non-online promotions could be easily linked to their online counterparts. But until that day comes, directions like this seem to be asking a lot of the audience.

But then that first half of me steps in again and says, “Well, what should they do, genius? Just leave the copy off altogether?”

No, of course not. But there might be a little explanation, a reason for me to go through all the trouble to follow @NescafeUSA. For example, why not: “For updates on more free samples, look for us on Facebook and Twitter”?

Maybe I’m overthinking; what do you guys think about urging people in meatspace to do something online?