I have been working on this post for almost three weeks.  Every time I think it is complete something else happens which makes me add more to it, as you will understand as you read.

Over the past few years, gay rights have been in the spotlight.  With states legalizing gay marriage, shows like Flipping Out and Queer as Folk debuted, and, stations devoted to the gay demographic such as LOGO surfaced, an acceptance of the gay population had made many strides in most of America. And isn’t it about time?

As we have seen with the acceptance of the gays, the embracing of social media as an important form of spreading awareness. Not only has social media been able to spread the word about issues, but it has made voices of those previously-unheard  heard. 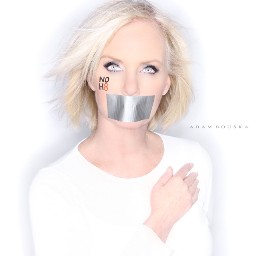 About a year ago, after Prop 8 was repealed, I began to notice images on Twitter of celebrities and people that I followed change.  They were sporting amazing, beautiful avatars by celebrity photographer, Adam Bouska.

These pictures were simple, yet intriguing to the eye. They depicted simple images, white clothing, a duck-taped mouth, and a NOH8 tattoo on their body.  These images began to circulate and create a buzz throughout the Internet.  From Kim Kardashian to Jane Lynch and Kimberly Locke, celebrities seemed to all be jumping on the NOH8 bandwagon.  Even controversial names in the news at the time were partaking in the photographs, including Cindy McCain, wife of the former presidential candidate, John McCain.

The pictures were so impactful that they created a media buzz, spreading around the Internet like a wild fire.  Adam Bouska even toured the country offering free photographs for supporters in New York City and other locations.  This online campaign included images and videos that were going viral through Facebook, Twitter, and MySpace. This was the beginning, of what I saw, as the unity of people coming together to fight against the bigotry and inequality aimed toward the gay community. This was just a piece in the long term goal in the fight, that was an online sensation.

Most recently, however, we have been plagued with some devastating news of teens that decided to end their lives because of the hate they felt. The month of October has been full of tragedies and people went to the Internet and social media to show their support to all the kids out there that were contemplating their lives.

Have you ever heard of The Trevor Project? I hadn’t before this month. After the weeks of suicides by the four kids, that actually made headlines, people began filming themselves with heartfelt messages to tell all the other teens out there that, “It Gets Better.”

Again celebrities came to the masses and shared their messages, including Perez Hilton, Tim Gunn, Ke$ha, and Ellen Degeneres.

Not only did celebrities share their thoughts, but regular, no-name people shared their support, words of wisdom, and advice for these youth. The videos hit the hearts of many as they circulated and this video from a Fort Worth City Council Man was one of the most heart warming videos ever.

After these suicides the media frenzy surrounding gays and the inequality instilled upon them, a surplus of attacks began happening. First, at the homeland of the gay rights movement, the Stonewall Inn, a gay man was attacked by two thugs that were looking for a fight.  Unfortunately, those dudes messed with the wrong guy that day and got the crap beat out of them.  (Words to the masses, most gay people are in more shape then straight people, so don’t be surprised if things don’t turn out how you’d expect.)

Next, in New York City, three men were seduced, beaten, and then sodomized in a garage by a group of guys just for fun. (They’ll go far in life)

A few days after this happened, our lovely gubernatorial candidate, Carl Paladino, made some not so fun comments about the gay communities including a comment about how he didn’t really want his children seeing men walking around in Speedos at the gay pride parade.  Mr. Paladino, as I’m sure you are savvy enough to see what people are saying about you online, the only man children shouldn’t be allowed to see in a “skimpy Speedo” is you. Good luck in your trip back to Buffalo, eat some wings for me.  (Excuse me while I recover from that mental image.)

Finally, just this week another attack was reported at the first gay bar in New York City. I mean, come on people. We have seen how people have come together online to accept the issue and learn more about it, why can’t we bring that same sentiment offline?

As we wear purple today in remembrance of those known, and unknown, gay teens who have killed themselves and given up hope, think about what it was like growing up. Think about those kids being bullied who are next.  Think about what you need to say to them to tell them “It gets better.”

Think about this too.