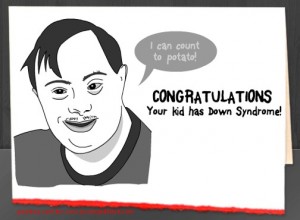 Etsy, the online marketplace self-described as “Your place to buy and sell all things handmade, vintage and supplies,” is the latest brand to suffer a full on image meltdown. And, like BP, Tiger Woods and Toyota before them, they’re also the latest brand to resolutely stick its head in the sand as a way of dealing with PR crisis and the resultant public outcry.

A friend alerted me late last week to the fact that Etsy was allowing a vendor to sell some very offensive greeting cards and shared Change.org’s petition requesting Etsy remove the cards–to date supported by almost 16,000 signatures. This friend has a daughter with Down Syndrome and was espe­­­­cially horrified by a card like the one in the image above.

Let me back up and say that I’ve been a huge Etsy fan and supporter for a long time now.  I love dealing with craftsman and artisans and have patronized Etsy vendors for years, buying things like hair bows, laptop sleeves, jewelry, reusable snack bags and mesh produce bags and a myriad of other handmade things.  And I’ve often preferred to go to Etsy for the things I’m looking for rather than eBay because the community they’ve created has always evoked a good feeling. A feeling of trust. I’ve felt that the people I’m buying from are people I might actually want to get to know and maybe even want to hang out with – and I certainly want to support them by buying their wares. For me, that kind of feeling is like shopping at the local specialty store versus at a big chain – and Etsy did it for me.

Then I discovered Etsy seller YouStupidBitch and the line of greeting cards they create and sell on Etsy – with a clever tagline “Greeting Cards for Awkward Situations.”

Neat. This Etsy seller makes cards that congratulate the recipient on being raped, or on being diagnosed with AIDS or cancer, or having a child with Down Syndrome, to name just a few. Appalled? I was.

As I began to write this post and dug deeper into the Etsy story, I realized that my warm fuzzy feelings about Etsy might have been unfounded. CNN reported in July of 2009 that vendors were becoming disenchanted with Etsy. In fact, in spite of billing itself as an “empire of entrepreneurs,” it was reported that only a handful of sellers actually made living on Etsy, yet the ability of the company to thrive depends on the participation of those entrepreneurs. Etsy makes its money by taking a cut of each sale and also charges a fee each time an item is listed for sale. Etsy has been valued at $100 million by investors and is rumored to take in more than $12 million a year in fees. Clearly, even if its sellers aren’t making any money to speak of, Etsy’s not having any problem in that regard.

In addition to rampant seller dissatisfaction with Etsy, there seems to be no shortage of claims of poor customer service. Etsy is also rumored to routinely censor unflattering commentary in its own user forums. Talk about things that make me crazy. Censoring commentary in user forums (or anywhere) makes me wonder what other kind of review censoring Etsy might be doing – and that’s a whole different blog post.

Etsy’s forum commentary policy, as reported by CNN, is that “Etsy forbids ‘discussing a specific member, store or item in a negative way.’” So, apparently if you don’t have a good experience and/or anything good to say, Etsy doesn’t want to hear about it. Hmmm. Sounds like a formula for great vendor relations and great customer relations.

My illusions shattered about Etsy, let’s get back to stuff that offends.

This situation is reminiscent of the recent brouhaha on Amazon about the book The Pedophile’s Guide to Love and Pleasure: a Child-lover’s Code of Conduct” that went on sale on October 28, 2010. After much outcry on Twitter, Facebook and by Amazon customers, the book was finally yanked by Amazon about two weeks later.

Amazon defended its actions in letting the book remain on the site because they “believe(s) it is censorship not to sell certain books simply because we or others believe their message is objectionable. Amazon does not support or promote hatred or criminal acts, however, do support the right of every individual to make their own purchasing decision.”

Amazon customers vehemently disagreed and made no bones about that displeasure. In fact, I recently Tweeted about a book available on Amazon only to have someone respond that they refused to buy from Amazon based on that lapse of judgment on their part. Apparently, a lot of people object to pedophilia “how to” literature being available on a site like Amazon’s. And before you get all 1st Amendment crazy on me, those rights relate to restrictions on speech issued by the government – not by retailers like Amazon or Etsy. Those sites make their own rules, and if they choose not to carry merchandise promoting hatred, pedophilia or religious intolerance, they can.

As my friend PRCog opines in a post on this very topic, these cards are against Etsy’s TOS and they’ve been notified. Repeatedly.  Those TOS aren’t at all unclear:

“Use of mature, profane and/or racist language or images in the public areas of your Etsy shop is not permitted. This includes your username, Public Profile, item titles, tags, avatar, banner and/or shop selections.”

Call me crazy, but rape seems to me to be both mature and profane.  And picking on someone’s kid with Down Syndrome – or any other disability – well if that’s not hatred, I’m not sure what is.

Here’s a CNN report covering the latest Etsy stinkbomb that’ll get you completely up to speed:

Here’s the thing. These greeting cards and everything they stand for are reprehensible. And I can’t imagine anyone – ever – receiving one and thinking they were funny. Being raped isn’t a joke. Nor is having cancer or AIDS or a child with a disability. Don’t take my word for it – ask someone who’s dealing with any of those issues – if you dare. This is, quite simply, the personification of bad taste and poor judgment.

But as bad as all this is – and as crappy as it is for a brand to advocate that it’s okay to sell this kind of merchandise, where the brand really disappoints is its lack of regard for its sellers. The way I see it, Etsy has a fiduciary responsibility to its sellers to do the right thing. Always. Because if Etsy makes a misstep–like this one–it can spell disaster for the many entrepreneurs and craftspeople trusting Etsy as an upstanding, trustworthy and reliable venue in which to sell their products.

This situation could – and probably has – resulted in a loss of sales for thousands of Etsy vendors – people who have nothing to do with YouStupidBitch and who are, like the rest of us, horrified by the audacity – and the bad taste of this particular product line.

But consumers – they’re an entirely different story. They aren’t thinking about that part of the puzzle. Consumers are thinking that Etsy sucks and, just like Amazon, they’re boycotting the site and making their purchases elsewhere. And while Etsy can probably withstand that financial downturn, its sellers most likely cannot. And that’s also tragic. And it might also be something from which thousands of Etsy sellers simply cannot recover.

And so, because of poor judgment and decision-making, the public is offended and horrified by Etsy’s business practices and/or lack of business ethics, Etsy sellers lose credibility and income and the morons behind YouStupidBitch get tons of publicity that they don’t deserve.

Great job Etsy. Keep your head firmly in the sand. And join the ranks of other brands who aren’t smart enough to just step up, admit to a mistake and fix the problem.  Way to go. By the way, if you want some free PR advice, this blog post by Justin Goldsborough is a great start.

Shelly Kramer is the CEO of V3 Integrated Marketing, a full service digital communications agency located in Kansas City, MO. She believes in fighting the good fight, standing up for things when standing up is called for and hanging around with people smarter than she is.  And if you offer her beer, she’ll say yes.  After hours, of course.