A roundtable discussion of agency executives from the Worldcom Americas Region Health Care Practice Group indicated that interest, expectations and budgets for leveraging social media are increasing considerably across all sectors of health care clients, and budget increases are being instituted for 2011 programs.  Agency experiences – coast to coast – were almost universally the same.

Worldcom is the world’s largest partnership of independent public relations firms with 112 offices located on five continents. The Worldcom PR Group’s Health Care Practice Group has 50 members worldwide, all of which have a specialty in the market segment.  A dozen of the 20 Americas Region firms participated in the roundtable.

With few exceptions, group members said their health care clients are expecting more from social media—and more from their public relations agencies in terms of new and creative ways to engage, measure and prove the value of these strategies. Budget increases overall were expected to be anywhere from 5 percent to as much as 20 percent for 2011 programs, with a portion of those increases earmarked for social media outreach.

The group agreed that to be effective and able to measure the success of outcomes, it is best to narrow the target of online influencers. Ed Keller of the Word of Mouth Marketing Association (WOMMA), and a speaker at the recent Worldcom PR Group America’s Region meeting, said 10 percent of the population is responsible for a quarter of all word of mouth, reinforcing the need to target the influences, not the masses.

Essentially all of the Worldcom Health Care Practice Group agencies are involved in creating social media platforms for their clients, building followers, assisting in content development, and, most importantly, driving engagement.

“Americans love to talk, and being part of a conversation is essential,” said Keller, CEO of the Keller Fay Group, and a speaker at the Worldcom PR Group Americas Region Conference on behalf of WOMMA. Keller said research has found that every day, 36 percent of Americans talk about health care – not surprisingly, more women than men. While most of those conversations take place face to face or over the phone, a growing number are happening online, particularly among teens and 20-somethings.

Knowing that you are actually engaging your audience is all-important, Keller said. The challenge for agencies and their clients is to build that engagement.  Some of the tactics they are using include:

In a survey of roundtable participants, all but one said they are finding that many more new business prospects are expecting agencies to have greater social media capabilities than in the past. The definition of media relations has broadened in health care to include social media outreach, they said.

Social media is important, but traditional media outlets are still predominant when it comes to media relations. Amy Mitchell, Deputy Director of the Pew Research Center’s Project for Excellence in Journalism, and a keynote speaker at the Worldcom Americas Region conference, said according to their research, 92 percent of Americans can be classified as “news grazers” – they gather their news from four to six sources – and this number has grown in just the past three months. At the same time, these grazers are not “aimless wanderers,” she said. They tend to go back to the same sites time and time again, and a third have signed up for news feed from social networks.

“The vast majority of information – 92 percent – is still coming from old media, the largest portion being from newspapers and their online platforms,” Mitchell said without dismissing the potential for social media. “New media alone has not filled the need,” she said. According to Pew research, only 340 of more than 4,600 online news sites attract 500,000 unique visitors a month, reinforcing the need to narrow the audience when you target social media.

Keller agreed. Research he presented showed that half of all conversations are prompted in some way by old media. “TV might prompt an immediate conversation. The Internet is likely to be the after-effect of that conversation as people go online and check it out,” he said, showing that both have their place in communications. 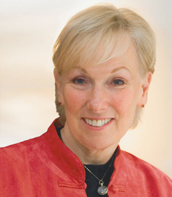 Dorothy Oliver Pirovano is a respected communications counselor who has worked with a diverse range of clients in developing communications and marketing strategies, defusing issues and crises and protecting the reputation of organizations. Dorothy has more than 30 years experience, coming from a career in journalism and rising through the ranks at Public Communications Inc. to lead the firm as its CEO. She has won her industries’ top awards as a journalist and communications counselor and today heads one of the nation’s largest women-owned communications firms. She provides career coaching to executives and was instrumental in developing PCI’s media training and presentation skills programs. In addition, Dorothy is the Chair of Worldcom Public Relations Group’s Health Care Practice Group. Check here for more information on the Health Care Practice Group within Worldcom.