Last week I wrote about the marketing issues associated with the Rebel Race, a military style, mud-laden obstacle course.  The organizers promoted it as a grueling course that allows participants to “test their physical toughness and mental endurance.”  Because of a lack of mud and a few unsafe obstacles, the race failed to live up to the hype which sparked a muddy revolt on the company’s Facebook page.

Can you say social media mudslinging?

Consistent with most mud runs, Rebel Race offered various heats on Saturday and Sunday.  By Monday morning, there were hundreds of rabble-rousers expressing their displeasure for how the event was run.  Someone actually set-up a separate Facebook group page that to date, includes a trove of comments and even a letter submitted to the Better Business Bureau.

So how did the Rebel Race react to this social media scrutiny? Some may argue not fast enough.  To their credit, the organizers posted an update on Saturday acknowledging work was being done to deliver a better experience for Sunday’s participants (see below). 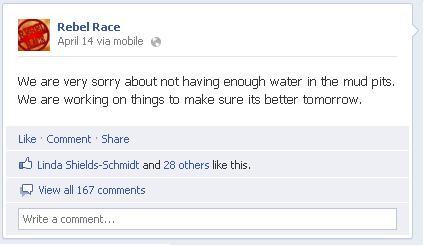 Unfortunately the race experience was more of the same on Sunday and the feedback on Facebook continued.  While there were some positive comments, the majority were negative.  On Monday, Rebel Race posted the following statement (see below): 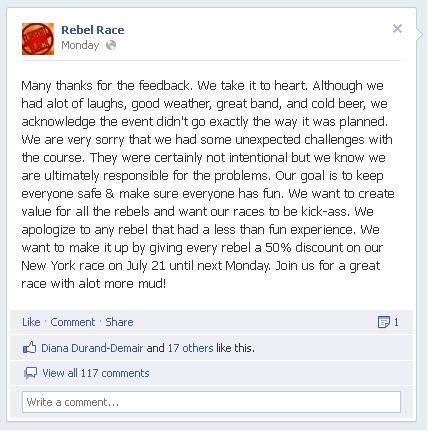 From a crisis communications perspective, the company’s message was direct.  It acknowledged the unexpected issues and reinforced the need to ensure safety. However it did not offer any assurance on how it was going to remedy the situation and fix future races.  In situations like this, rebuilding trust is priority one.  Offering a 50 percent discount (with an imposed deadline of seven days to redeem it) as a consolation for a “less than fun experience” is not the best way to earn a second chance. Perhaps a full refund or free registration to a future race would have conveyed genuine concern, empathy, and a commitment to making things right.

Social media offers a two-way channel to engage with people and listen. It’s debatable whether or not the Rebel Race was listening, but they are clearly in a muddy mess.

Domenick Cilea is president of Springboard, a marketing communications firm specializing in the technology and telecommunications industries. Serving clients located throughout theUnited StatesandEurope, Domenick has embraced the evolution of traditional marketing and public relations disciplines as well as the emergence of digital strategies and social media. Follow him on Twitter at @dcilea.