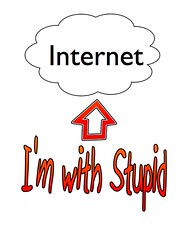 …if your boss is an ass?

I don’t just mean they waste your time at work (time they’re paying you for, let’s be serious for a second so at some level, wtf do you care?), but I mean a real ass – doesn’t rewind his video tapes before returning them to Blockbuster, steals pencils from schoolkids kind of ass?  Oh yeah, he’s also just a little bit racist.

So yesterday evening someone (and no, I’m not naming names, so don’t ask – and let’s be real, odds are someone else is writing this elsewhere and is naming names so just hold yer horses) tweeted exasperation at a situation in which they allege individuals from a certain race created a challenging scenario to the twitter user in question. The situation fit in with existing stereotypes so it was an “easy” tweet. About ninety minutes later this person removed the tweet and apologized.

For those of you who have seen my prior rants, you’re likely assuming my temperature rose a few degrees. You’d be right. Half of me had a skewering blog post written in my head with the full intention of sending advance copies to “influential” friends with a copy handily landing on this person’s HR department.

I sought out the advice and calmer head of co-PRBCer and yet-to-meet-IRL friend Shelly Kramer and the situation made both of us sick. On one side – did this person just have a bad day? We’ve all had them. But what kind of ‘someone-pissed-in-my-lemonade’ kind of day does someone have to have to make a public racist comment? I didn’t have an answer. Though the fact remains we don’t know their story and haven’t walked a mile in their shoes. Is it my job, or even my right, to set in motion events which may make someone lose their job? And perhaps other someones who are dependents lose their source of income as well?

On the other side – who gives a hot damn what kind of bad day this guy had. There are three other guys I’m thinking of:

I don’t know who’s more right, and I’m not sure I’m qualified to make that decision and I’m definitely sure it’s not actually my problem.

It would be great if this person, rather than skulk around work on Tuesday hoping they won’t be noticed, went to their HR department, fessed up and figured out WTF could be done that caused the least amount of damage but the most amount of good (hint hint). I don’t picture that happening, but it would be nice if it did.

But do tell good reader (since we’re always supposed to include a CTA) what would you do?