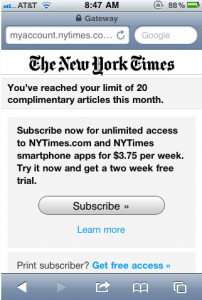 I’ve long maintained that paywalls are a terrible idea and do nothing but drive potential readers elsewhere. The ROI of putting your content behind a paywall is far less than charging appropriate advertising rates on your site, or other inventive ideas. Don’t believe me? Ask yourself END_OF_DOCUMENT_TOKEN_TO_BE_REPLACED