All opinions (and I mean all) herein are my own and not the official opinion of PRBC or any of the other writers.

There’s a software company I’m a big fan of — CoffeeCup [and no FTC, they aren’t compensating me in any way].  Most of the software they create is for website development – ftp programs, html coding, flash animation, etc.  The software’s always very user-friendly, they provide good support, have an active message board for customers, provide free updates, and give away a decent amount of free software so you can get a flavor of what they produce.

It’s a feel-good company.  The company name “came from the domain name of the coffee house where we got our start. (Yes, we owned a real coffee house first.) Domains cost $100 a year back then, and coffeecup.com was already paid for, so why invent a new name?”  They claim to run on “an unlimited supply of Red Bull, Mexican food, Jelly Bellies, and passion for our users.”

The most expensive single piece of software costs $49.

Perhaps best of all, the company “provides discounted software to schools, the disabled, and those in need. In the past, we have collected seven tons of goods for Hurricane Katrina relief efforts, raised more than $1 million for September 11th support agencies, and collected more than $50,000 for Tsunami victims.” (Emphasis mine).

This is a company I can get behind — good product at a good price, sense of humor, do their best to help others.  It’s a win-win-win.

So when I got an email with a subject line of “Save the Boobies With CoffeeCup” and realized it was already October (National Breast Cancer Awareness month) I knew what they were up to.  I was familiar with the ‘Save the ta-tas’ campaign and know of other similar campaigns and (as a modern dad) am familiar with similar strategies from breast-feeding advocates. 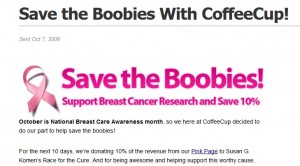 CoffeeCup was offering users a 10% discount on software from their ‘pink page’ and donating 10% of their revenue to the Susan G. Komen Race for the Cure.  Nice all around — provide financial incentive to buy software and a goodwill incentive as well as doing some good all at the same time.

Slight tangent — One thing to know about me – notwithstanding my constant low-level flirting, I adore strong women.  Both my grandmothers were in the workforce, I’ve never known my mom not to work (heck, she served in the military) and heaven help me if I ever showed any disrespect to a woman or pulled a “but she’s just a girl” type comment as a boy.  When I say (tweet) that the #PRBC ladies keep me in check the only part that’s a joke is that they don’t really need to.  So this post is not just an excuse for me to blog about boobs.

If I didn’t already own all the CoffeeCup software I need, I would’ve bought some.

Apparently not everyone agreed.  Thursday evening I got this message: 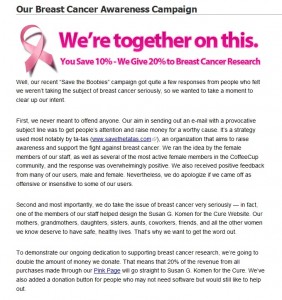 Potential image / PR problem — particularly bad when all you were trying to do is a good thing.  It even seeped into their twitter feed.

So, my flacky brethren, too much, not enough, just right?  What more would you have liked to see from our friends over at CoffeeCup?i