While most of us were enjoying our Thanksgiving turkey, trimmings and (hopefully) football, some were enjoying waiting outside their local Targets and Wal-Marts. Both retail chains opened Thanksgiving night for early Black Friday shopping and s

pecial deals. This didn’t make some folks too happy, including those that had to work at the retailers.

News outlets and people on social media were critical of Wal-Mart and Target for opening early on a day that you normally spend with your family. Workers at Wal-Mart planned protests; Target also had its fair share of grief as well. In the end, it seems the noise was a whole lot of just that… noise.

Wal-Mart saw record sales on Thursday into Friday and it appears those protests were not very well attended. But, will both retailers see future resistance and take a PR hit because they opened on Thanksgiving? 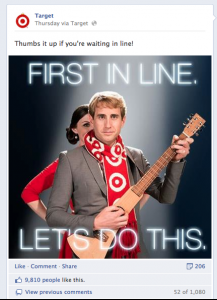 Honestly, a lot of the noise on social media came from those that weren’t even going to shop. A few posts on Target’s Facebook page railed against the retailer saying they should be ashamed. But, another woman, a 20+-year Target employee, said she had no problem working. The same goes for Wal-Mart. People were working because they need the money or they wanted to work, in most cases.

Wal-Mart gets enough criticism in the media and public, in general. But, they keep opening up SuperCenters all around the country. They just seem to keep moving forward, despite of the critical comments. If sales were outstanding, as it appears, then you can bet Wal-Mart will open again next Thanksgiving night. The same goes for Target.

We know full well that people like to be loud on social media, whether it is warranted, or not. We also know that this is a business for Target and Wal-Mart. Would it matter to them if they DIDN’T open? It could. Is it worth the hit they took for opening on Thanksgiving? Sure seems like it was.

The bottom line is this: Wal-Mart and Target may have taken an (apparent) PR hit a few days leading up to the Thanksgiving night sales. But, the financials at the end of the day make it very hard to say it was a bad move, even PR wise.