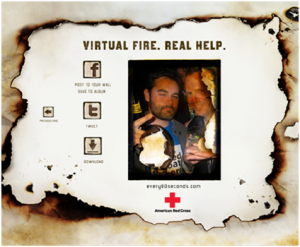 Perception is a huge game changer in the public relations industry. If you can swing the public’s opinion of a brand from a negative view to a positive light, you’re essentially golden. Perception is not black and white—in fact that is hardly the case—and it definitely does not always have to be viewed as just positive or negative. Sometimes PR pros have to change the public’s opinion from one overarching association to the realities of the day-to-day mission. This can be tricky especially when media coverage tends to be higher during the anomalies.

For the American Red Cross, this game of perception has become increasingly challenging. The public sees the organization as a humanitarian non-profit that deals with blood and large scale disasters. While this is true, it does not represent the single largest disaster that the Red Cross responds to across the nation. And quite frankly, people need to know the truth. Home fires destroy memories every 80 seconds.

Today the American Red Cross is setting the Internet on fire.

To remind people of Red Cross Month and the official end to “fire season,” the Chicago Chapter has decided to bring the call-to-action against home fires into your every day routine. Think about your morning activities—wake up, check Facebook. Okay so maybe there are some activities in between like showering. But Facebook has become a place for people to store memories. It has essentially become our online safe house for photographs, friends and conversations.

The Chicago Red Cross has developed an online experience that will import six copies of your personal Facebook photographs and virtually “set them on fire.” By visiting www.every80seconds.com, users can login to Facebook and watch as their precious memories burn away before their eyes like a piece of paper curling away from the light of a match. After your photographs are virtually set on fire, users are given the option to either donate to the Red Cross or share the campaign by posting to their Facebook walls, tweeting, or burning their own profile picture.

Media partners have additionally jumped on board throughout the month of March to promote the Red Cross campaign by either burning their own website homepages or hosting a banner to increase awareness around home fires. To see the fire takeover on a news site, check out Chicago Breaking News. The Chicago Tribune, Metromix, RedEye,  ABC Chicago, CBS Chicago, NBC Chicago, WGN, Mashable and Social Media Club are some of the dedicated outlets working with the Red Cross to promote the campaign.

For me, this campaign is hard hitting and personal, not only because I was close to the strategy and development behind it, but because my house burned down when I was 16 and my family lost everything. Watching my Facebook photographs virtually burn away makes me teary eyed every single time.

I encourage you to visit www.every80seconds.com to experience the loss of your memories and spread the word if you are inspired. Don’t worry—your Facebook photographs are safe and sound after the experience.

But for 70,000 people every single year, this not just another virtual experience.

Let’s work together to change the long standing perception that the Red Cross is mainly involved in large scale disasters because honestly, the families that lose everything today need a community like you to support them. And you can help them in less than #80seconds just by sharing the experience as a “voluntweeter” for the Red Cross.