I am a passionate advocate of crowdsourcing, which for the uninitiated is a brand or organization taking and using content or suggestions from the crowd that constitutes its audience.

One of the originators was Maxine Clark, founder of St. Louis-based Build-A-Bear, who years ago realized she could allow her customers – little kids – to customize her products to their specifications. More commonly recognized examples are Dell’s “Idea Storm” or Starbuck’s “My Starbucks Idea,” both providing opportunities to submit product ideas or improvements and each having brought much-deserved kudos to their respective brands. END_OF_DOCUMENT_TOKEN_TO_BE_REPLACED 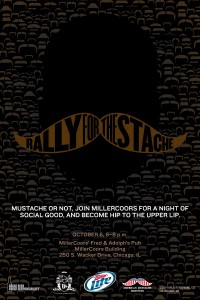 Most of us strive to be known as brand builders, reputation managers, crisis maestros, et al. For better or for worse, I’m considered the world’s foremost authority and advocate on mustaches.

In summer 2006, I mused with a few friends “Why not bring the mustache back into prominence?” That turned into a non-profit organization, online community, living and breathing digital Petri dish going on six years now that’s been featured by CBS Sunday Morning, Rachel Ray, USA Today, ESPN, “Fashionably Late With Stacey London,” the “Colbert Report” and more. END_OF_DOCUMENT_TOKEN_TO_BE_REPLACED

Two years ago I was talking to an executive of an NFL franchise. Twitter was just blowing up and I counseled him that the team should be harnessing their players’ burgeoning interests in getting on the social media tool as a means of connecting with fans.

Set the tone with your employees, teach them how to use it, and you’ll potentially have a quality brand ambassador.

His response to me was, “There’s no way in hell we’re letting our players on Twitter.”

And I thought, “Man, he doesn’t get it. He has no choice. His players will be on, and he’ll have lost the battle before it even begins.”

All of this brings us to the case of Rashard Mendenhall, the talented yet troubled Pittsburgh Steelers running back. END_OF_DOCUMENT_TOKEN_TO_BE_REPLACED