Do you want to know an inside secret on how to pitch a blogger?

You have to talk to them like they’re a human being.

I know, it’s crazy. It doesn’t have much to do with the length of your pitch or the “Hi” instead of “Hello” in your salutation. It doesn’t have anything to do with how many bullet points you have and what Cool Blogger Slang you employ. You just have to talk to them like they’re an actual person, which, gasps all around, they are. (Another crazy fact: journalists are also people. Maybe you should give this a shot with them too?)

Just one rule: talk like a person, treat them like a person. Here’s how to do that.
END_OF_DOCUMENT_TOKEN_TO_BE_REPLACED

When David Letterman sat down at his desk like he does every night after his monologue and told everyone he’d conducted affairs with women he worked with, the world did not end. No one at CBS called for his head on a platter. His live studio audience did not get up and walk out of the room. As far as we can tell at this moment, his advertisers have not elected to pull their ads from his show. We’ll see on Monday, I suppose, whether his ratings will be affected, but my guess is the safe one: if there is any change, it will probably be an increase in viewers curious to see what else might happen live on his program.

Let’s be clear here: no one likes cheaters, no one is cheering on philandering bosses, no one is giving a high five to yet another high profile scandalous affair. But there is a clear difference between what is happening right now to David Letterman and what has happened in the past to other adulterous public figures. And that difference can, in part, be attributed to Letterman’s handling of the situation. It really was the best of all possible confessions.
END_OF_DOCUMENT_TOKEN_TO_BE_REPLACED

You will never write dialog in business writing, except when you do. In press releases, you often have to quote someone. In e-mail exchanges, you might have to recount a verbal conversation accurately. Guys, it just helps to know how to write and punctuate dialog without looking like a jerk.

Here’s how to do it:

END_OF_DOCUMENT_TOKEN_TO_BE_REPLACED

Here’s a bold statement that I’m sure I’ll be forced to prove somewhere around the end of this post: the things we write when we flack, market, and rep products can change the course of history.

I’ll let that stew in your brain-soup for just a moment while I take what must seem like a sharp right turn in this argument.

I want you to think about makeup, and what makeup is all about. I’m not anti-makeup. I wear it just like any other businesswoman does. Without foundation, powder, eyeliner, eye shadow, lip liner, lipstick, mascara, and eyebrow pencils, our faces do not look very pretty. We have blemishes and freckles and age spots and wrinkles. We have sallow eyes and pale lips and bushy eyebrows and ingrown hairs.

Without makeup, we are ugly. Makeup makes up for these deficiencies.

END_OF_DOCUMENT_TOKEN_TO_BE_REPLACED

The following takes place via e-mail. What you are about to see is a dramatic reenactment of a group of caffeine-depraved flacks talking about the MTV Video Music Awards.

END_OF_DOCUMENT_TOKEN_TO_BE_REPLACED

I love TV. I love it so much that I harshly judge people based on their viewing habits. I’ve ended relationships because of disagreements over which Iron Chef series is better (original, duh). So I take TV very seriously.

I also watch a lot of TV online or via Netflix because, you know, geek. I finished Dexter season two months ago and was really looking forward to starting season three, which just came out on DVD. This is all background information for my griping.

My point is, I walk outside my office one afternoon and I see this noise: 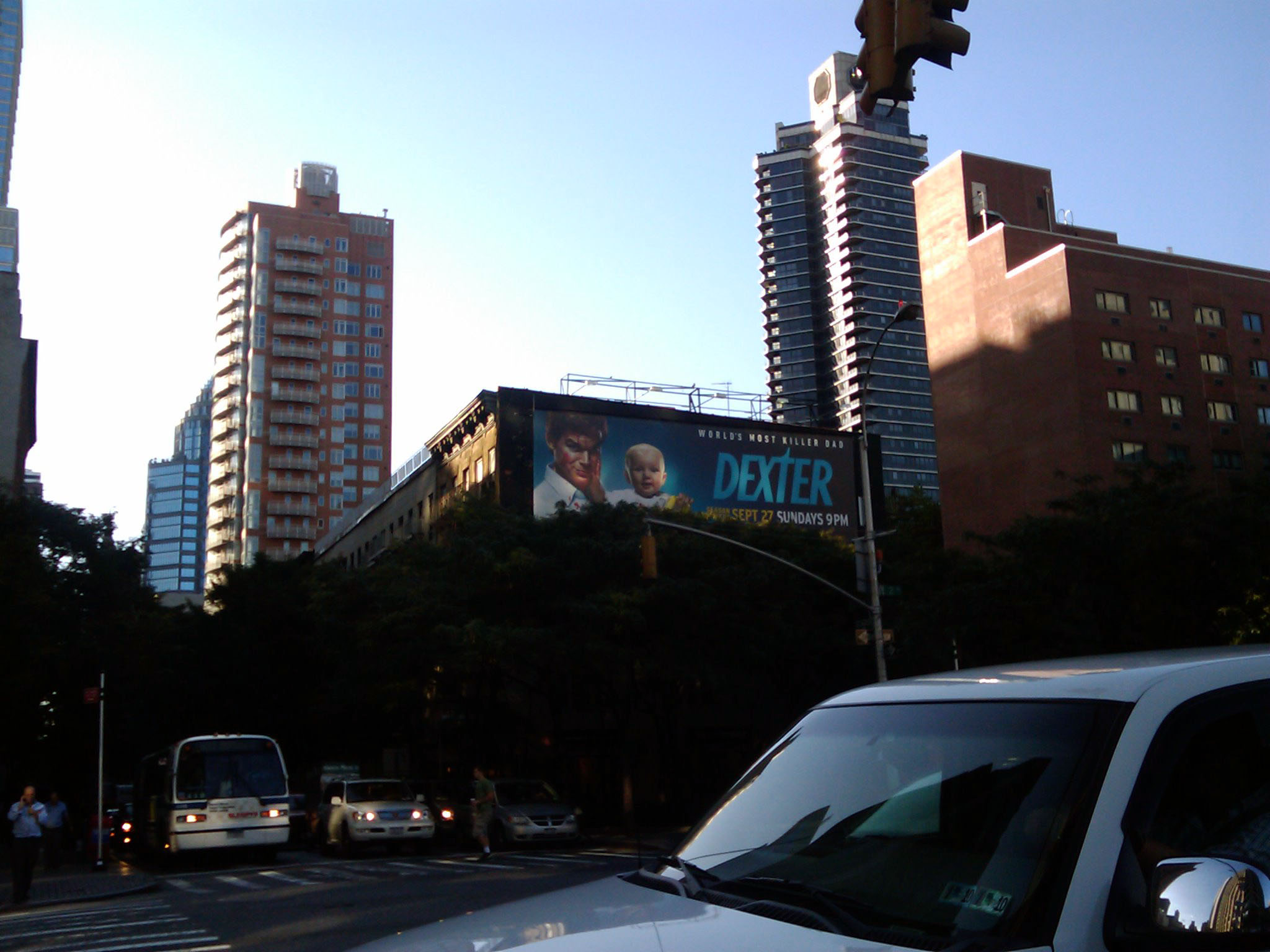 Y’all in NYC have probably seen these promos for Dexter season four all over. It’s in the subway and on buses and, I dunno, stuck to the backs of the doors in women’s rooms.

And it pisses me off because it’s like a giant spoiler that’s following me everywhere!

“Teej,” say the unfortunate people who must listen to me whine about this, “it’s not that big of a spoiler. I mean, it’s just Dexter holding a kid. Could mean anything.”

To those unfortunates I say: LOOK AT THE COPY.

Here’s my dramatic reenactment of how this ad campaign came about. Imagine a room full of modern day Mad Men wannabes: Diet Coke instead of scotch, mint gum instead of cigarettes, you get the picture. And GO:

“We can just have the picture of Dexter and the baby. Good image.”

“Do you think people will take it the wrong way? We don’t want people thinking he’s going to kill the baby.”

“Nope. No baby-killing. Can’t have that.”

“We need some copy that explains that he’s not going to hurt the baby.”

“Oh, how about ‘This is Dexter’s baby that he had in season three that TJ Dietderich hasn’t seen yet because it just came out on DVD’? Good?”

“Yeah, but ‘World’s Most Killer Dad’ is snappier.”

It’s not like this baby was a secret; I’m told there was a special behind-the-scenes episode about this plot line. But I had gone to great lengths to avoid those things. Copy, on the surface, seems to have very little to do with my spoilery anger. But allow me to make an incredibly far reach.

I believe that all copy, even ad copy, should consider its audience. Not its intended audience, not its target demo, but every single person who’s going to be looking at it. Obviously the ad dudes considered the people who might be offended by the image of the baby with a serial killer (oh, spoiler alert, if you haven’t seen season one: Dexter is a serial killer). Why not also consider the people who would be offended by spoilers? Why not just let that image and the show logo speak for itself? Why the annoying little pun that destroys all the mystery?

Here’s the thing about writing: it’s on everything. Newspapers, TV shows, blogs, web sites, Twitter, e-mails, press releases, yogurt cups, bus terminal walls, billboards, handbills—all these things are covered in copy. And, like most things in this world, 90% of it is just terrible.

It’s a lifeless, mediocre attempt at grabbing and keeping our interest, of sparking our imaginations, of helping or guiding or moving us. But until the PR industry comes up with some sort of sci-fi helmet that we can use to just beam our pitches directly into the brains of the people we want to speak to, we’ll have to learn to be brilliant among all this flotsam that the unfortunate public has been exposed to.

END_OF_DOCUMENT_TOKEN_TO_BE_REPLACED

What is the PR Breakfast Club? All right, I’ll tell you. But we think you’re crazy to make us write an essay telling you who we think we are. What do you care? You see us as you want to see us – in the simplest terms, in the most convenient definitions. You see us as a brain, an athlete, a basket case, a princess and a criminal. Correct? That’s the way we saw each other at 7:00 on the morning of July 23, 2009.
It all started when @stina6001 said this: http://twitter.com/stina6001/status/2798413038
So then I says, I says to her: http://twitter.com/tjdietderich/status/2798525223
Get it? It’s like we’re all different but the same just like in the John Hughes movie, and also we talk around the time we’re having breakfast! So that’s the mytical lore behind that. But without people like @PRCog, @KeithTrivitt, @CTMichaels, and @pjdixon77 (who I’ll call the “early adopters”), the use of the hashtag wouldn’t have taken off like it did.
Now tons of people use #prbreakfastclub to talk about work, news, and lulz. I’ve met a lot of tweeps through #prbreakfastclub I wouldn’t have met otherwise. It’s open to anyone, of course. This is Twitter, after all. But everyone who participates is a PR flak in one capacity or another, and we all share a penchant for social media. And scooped-out bagels (and the mocking of them).
Members of the #prbreakfastclub can’t really be defined beyond that. It’s a hashtag, it’s a conversation, it’s a group of flaks that are on Twitter, it’s a chance to vent, to catch up with friends near and far, and to start the day off right.

What is the PR Breakfast Club? All right, I’ll tell you. But we think you’re crazy to make us write an essay telling you who we think we are. What do you care? You see us as you want to see us – in the simplest terms, in the most convenient definitions. You see us as a brain, an athlete, a basket case, a princess and a criminal. Correct? That’s the way we saw each other at 7:00 on the morning of July 23, 2009.