Before I get chased out of my profession by my superiors, I want to make a few things very clear:

Now that we’ve laid some ground-work. . .or covered my backside, whichever you find more appropriate. . .let’s get to the reason for making myself perfectly clear (other than abiding by the Co-Communications mantra, ‘Make Yourself Perfectly Clear.’) If veterans of the PR industry don’t evolve, can they survive? Or will they die-off like the newspapers we sorely miss?

Who Thinks of These Things 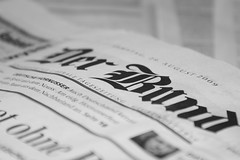 The impetus for this post may surprise you. It stems back to a #PRSA breakfast in Connecticut at the University of Hartford back in April. I was listening to the editors of the East Hartford Gazette, New Britain Herald, and Valley Press discuss the evolution of their industry and how PR pros could help them. It was a great discussion. Until that fateful sentence fell on a silent room and nearly dropped my jaw to the floor.

A woman who professed to having worked in PR for more than two decades stood to ask a question and the first thing she said was the last that I heard:

I never want to hear someone say they are following me.

I was fairly new to Twitter at the time, but I knew the statement didn’t make sense. Did she really think she could survive in PR without embracing social media? Or at least try integrating it into her professional life. I was stumped (and I’m pretty sure I heard @kottavio gasp in horror.)

I may loathe Facebook but I know well-enough that if I can’t claim a minimum of basic proficiency with it, I’m done in this industry. Same with Twitter (which I love, for the record,) YouTube and LinkedIn.

So, how do those who have invested decades in an industry that has nearly turned upside-down overnight, acclimate to the new media world of PR circa 2009? Never mind ‘do they.’ Can they?

The good news is that the old rules have relevance in the new world. Relationship building – albeit in the virtual rather than physical world, follow through, strategic planning and results still matter. They’re just slightly different than they used to be.

Face it. Whether it’s a strategy for sending news releases to newspapers or for acquiring followers on Twitter, neither will be successful without a well-thought-out and carefully executed plan that demonstrates a solid understanding of how this isolated act impacts the bigger world.

Despite the relevance of old rules and tools, there is a need for adaptation. (Even I need to adapt. I may be decades younger than those I’m referencing, but I didn’t think I was training for a career in virtual PR during my education.)

It’s tragic, but I think those who choose not to adapt and evolve have no choice but to jump ship. Particularly, in light of those graduating from college with PR degrees that encompass social media education and the volume of reporters transitioning from jobs at print pubs to careers in PR. Both know the value of a strong digital/social product and how it can ultimately inspire the rise (or resurrection) of a dying breed.

As a member of the PR generation deeply immersed in a social media world, I ask both my peers and superiors, who is the change agent for converting industry veterans to new media dynamos? Should we witness their demise and bear the loveless label of not-so-innocent bystanders? Or are we the change agents, despite our limited base of industry knowledge?

I think we are obligated to be the change agents. We need to learn about building and maintaining media relationships from the pros, and we can gain a lot of knowledge to apply to our social networks. Somebody (us again) needs to look at the ‘old media’ results and devise and implement a strategy for converting them into equally-valued cornerstones of the new media world. It won’t be easy, but it has to be done. And we aren’t all graced with the powers of Samantha to prescribe an instant-fix. (And please don’t tell me that reference predates anyone reading this post. That realization might break me.)

With our mission set, how do we act upon it? Implement it? Or, my favorite part, build the strategic plan for executing it?

In addition to blogging for PR Breakfast Club, I regularly contribute to the Co-Communications blog. To read more of my (hopefully insightful) commentary on related topics, click here.