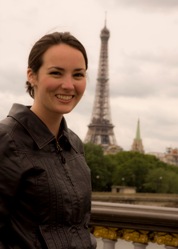 This week I had the opportunity to pick the brain of Amy Mengel (@amymengel). Like some of my other  guests, Amy is one of those rare breeds that doesn’t rely on coffee. Although she enjoys “fake coffee” like Frappachinos, you’ll more than likely find her sipping Diet Coke for a little caffeine fix.  It’s okay Amy, we promise to not throw any fresh produce your way ;). In the summer months you can find her commuting to work often on two wheels as she is an avid cyclist. During fall months Amy is all about college football and skis slopes in the winter months. When she has free time, this book nerd can be caught bumming at the library looking for some new favorites to dive into. Amy relies on her well managed Google Reader to help her stay on top of the PR/SM news. Some of her favorites include: The Brand Builder, Todd Defren’s PR-Squared, and Dave Fleet’s blog. She also geeks out over Marginal Revolution and Strange Maps.  And so I give you, Amy Mengel, discussing corporate communications, consulting, Facebook, and the importance of strategy/tactics.

END_OF_DOCUMENT_TOKEN_TO_BE_REPLACED 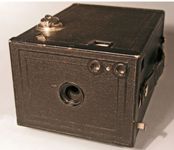 But one man is taking a proactive approach to change Kodak’s public image as a has-been major American brand, and is actively pursuing a new, digital future — one in which Kodak is rebranding itself with a heavy dose of successful social media outreach and engagement. END_OF_DOCUMENT_TOKEN_TO_BE_REPLACED

During another one of my random midday reads of interesting social media news and tidbits, I came across this fantastic BusinessWeek poll of CMOs. The big takeaway for me was that most CMOs think social media agencies are completely full of s***. Most agreed that those agencies have a pretty good understanding of what can be done with social media, the CMOs that were polled also noted that many of the social media agencies they have dealt with have no clue about business, the nuances of their client’s industry, who their clients’ competitors are or how social media can help a business get ahead of its competitors. END_OF_DOCUMENT_TOKEN_TO_BE_REPLACED

In the grand scheme of things, our constant, seemingly never-ending discussions and Twittering and blogging about the evolution of PR/marketing/advertising and how cool social media is will eventually die down, and we will get back to our normal—albeit now drastically altered (hopefully for the better)—professional and personal lives.

So rather than talk about what is currently going on in the social media landscape (look, a new Twitter app came out . . . and another!), I’d like to actually think about what we *might* be talking about a year, two years, or five years from now. Specifically, mobile technology and just how big of an impact it’s going to have on our lives, particularly in the PR world.

Look around you; the damn things are everywhere. You can even take a cell phone into a delivery room now and tweet while giving birth! Crazy, I know. But that’s just it: The effect mobile technology is going to have on communicators in terms of how we get messages across to key influencers, and how we engage the public, will be enormous. Far bigger than what is currently going on in the social media landscape. We’re talking about a technology that is now in the hands of more than 82 percent (250 million) of Americans and approximately 50 percent of the world!

But it gets even better: A recent MediaWeek study showed that 1 in every 7 minutes of media consumption is now done through mobile technology. Think about that for a minute: That great op-ed you wrote for your client that’s read on an iPhone now by the most tech-savvy around us? Give it five years. Everyone in your community is going to be instantly reading it on their smartphones, tweeting it back out to their followers (if Twitter still exits in five years . . . .), and sending it all over their social media network(s) to audiences you could have never even dreamed of.

Or even cooler, the fact that very soon (as in, it’s in its infancy now in the U.S.), marketers will have the ability to embed special 2-D barcodes into posters, shirts, billboards, practically anything, and someone with a mobile phone can take a picture of it and get all kinds of cool promos, buy movie tickets, or even get train times sent directly to their phone. Don’t believe me? Check out this piece from The Economist for a view into the not-too-distant future.

So what does that mean for you, the PR guy, the marketer, or ad man who is desperately trying to keep up with the current changes? Well, I hate to tell you, but it’s only going to build from here. And that’s actually a good thing. Because while the last five years in our business has seen a rapid growth and movement toward expanding from traditional services and offerings, opportunities are going to continue to arise that will keep us busy—and hopefully—excited for many years to come.

I envision a future in the PR world where certainly ideas like the social media news release, Wikis, and other mobile-friendly formats will become even more prevalent, as brands quickly realize that there are far more efficient and cheaper ways to reach their targeted consumers than the traditional giant, static billboard on the side of the road.

Where do you think the PR, marketing, and advertising industries are moving? Are the technologies and ideas I noted above going to be part of this movement, or are these just flash-in-the-pan ideas? Let me know!

Brands and marketers are rapidly leaving the orbit of “paid media” dominance and entering the gravitational pull of the age of “earned” and “social media.” But first a definition, compliments of Wikipedia: