Everyone is inundated with news about Google Glass, the wearable computer the world wanted, but maybe isn’t the iteration the world needed. Let’s be honest – it’s not a fashionable wearable. Even people who need glasses hate glasses, with many opting for laser surgery or contacts. Sure, the ease of just using voice commands with minor touch interactions on the right temple of the frame is groundbreaking, but there’s a very high risk of focusing too much in the upper right-hand corner of your field of vision where Glass is positioned.

Here are 10 reasons why wearing Google Glass just might hurt more than it helps:

END_OF_DOCUMENT_TOKEN_TO_BE_REPLACED

The latest version of “social media Taps” was an analyst saying that Facebook would “disappear” in five to eight years. Eric Jackson, the founder of Ironfire Capital said, “…(t)hey are going to disappear in the way that Yahoo has disappeared. Yahoo is still making money. It’s still profitable, still has 13,000 employees working for it. But it’s 10% of the value that it was at the height of 2000. For all intents and purposes, it’s disappeared.” END_OF_DOCUMENT_TOKEN_TO_BE_REPLACED 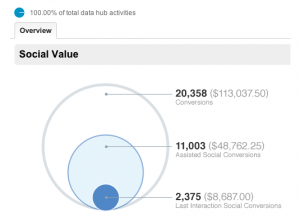 I struggle with ROI in the social sphere, as I’ve talked about before. Google has taken a huge step forward this week in measuring the ROI of social media, as it announced the first concrete effort at valuing efforts in this arena. The three main reasons Google made this change (from the Analytics blog): END_OF_DOCUMENT_TOKEN_TO_BE_REPLACED

Much has been made of Google’s unified privacy policy that went into effect last week. In my Twitter feed, I saw the usual suspects; threats of dumping all Google products, enraged people shouting about how Google is out to take over the world, you know, a whole lot of this. Perhaps these people are unaware of how commerce on the Internet works. This is always a good reminder for us as PR pros, and for our clients. The number of companies that collect your data for their own marketing purposes or for their partners is astronomical. However, let’s rundown a few of the major names to put this in perspective: END_OF_DOCUMENT_TOKEN_TO_BE_REPLACED

Over the last few days, I’ve been doing a fair amount of reading about Google’s new privacy policy. It has received some positive and negative views. Privacy, to many, is a premium; we don’t want our information shared or sold to anyone. Of course, I enjoy privacy, too.

Here’s a (not so) little secret, though. When you log onto Google, Facebook, Twitter, YouTube, etc., your information is out there. You signed up for a Gmail account or to have a Twitter profile, you understood there was a risk. So why so many complaints about your privacy being infringed upon? Because we all need something to take issue with nowadays. END_OF_DOCUMENT_TOKEN_TO_BE_REPLACED

If you mentioned that you had a BlackBerry to a friend or colleague a few years ago, you may have heard some envy. Research in Motion’s (RIM) product was solid and perfect for the on-the-go business person. Lately, though, RIM has seen it’s reputation tarnished. It has left many wondering if the company will ever really recover.

Just this year, BlackBerry has seen the PlayBook launched to lukewarm reviews and disappointing sales. Earlier in October, Best Buy announced that it was cutting the PlayBook price by $200. In September, RIM’s said it shipped only 200,000 PlayBooks. On top of all this, revenues fell sharply after a disappointing second quarter of 2011. END_OF_DOCUMENT_TOKEN_TO_BE_REPLACED

Alongside the announcement of Google’s acquisition of Motorola the companies pulled some additional quotes from other Android partners.  Take a quick look at the quotes below.  Underlines are mine.  You tell me, which ones of these things is just like the others… END_OF_DOCUMENT_TOKEN_TO_BE_REPLACED

By now, our world has experienced and started actively using the latest in social platforms. Google+ launched to excitement and rightfully so. Google has been looking to enter the social space for some time. But, I think we need to temper this giddiness a bit. Much like Facebook and Twitter before it, time is needed before we can really understand how Google+ will fit into our plans. Should we do our due diligence on it? Absolutely. Any good social media manager or PR professional should be researching and planning to uncover any which way it can be used effectively.

In the last few weeks, though, I’ve seen that it will be a “Facebook killer.” I’ve also read numerous stories telling me that LinkedIn needs to watch out because Google is coming with “Google+ for Business.” The old adage, “Rome wasn’t built in a day” fits here. How can anyone truly know what it will do to Facebook? We had no idea that Facebook would eventually make MySpace irrelevant. Who saw Twitter becoming a success? END_OF_DOCUMENT_TOKEN_TO_BE_REPLACED

Some quick thoughts from a marketing, PR and ad perspective on Google’s just announced new foray into social networking — the terribly named Google+ (as Danny Sullivan of Search Engine Land terms it*).

As I tweeted earlier in the day:

keithtrivitt: Prediction: Ad buyers will be all over Google+. More open analytics plus more targeted networks to tap into http://t.co/usHznta

I like that Google has started out by opening Google+ to only a select few and allowing them to invite their friends. END_OF_DOCUMENT_TOKEN_TO_BE_REPLACED

Unless you were living under a rock last week, you likely have heard about the big ethical flap that PR firm Burson-Marsteller found itself in after it was outed by USA TODAY for engaging in an attempted smear campaign on behalf of its famous client, Facebook, against Google. “Whisper-Gate” it’s being called.

Long story short: things blew up — dramatically — in one of the most egregious displays of unethical practices our business has seen since Edelman got caught in 2006 for its fake blogging tactics on behalf of Walmart. Let me be clear: B-M’s actions on behalf of Facebook were unethical and improper.

All of the details of this epic tale have already been fleshed out (including new revelations over the weekend from WIRED.com reporter Sam Gustin that B-M was deleting negative posts about the firm on its Facebook wall) in the hundreds of stories that were written last week. Now, it’s time to consider the long-term impact this will have on PR.

Will our profession use this as a teachable moment; an opportunity to reassess our commitment to serving the public interest and being ethical counselors to our clients? Or will we just brush it aside as yet another instance of an ethical lapse taking center stage for a couple of news cycles.

Speaking as someone who manages advocacy for PRSA, a professional organization that strongly advocates for stringent ethical standards in PR, I sincerely hope it is the former. This unfortunate incident has cast a negative shadow upon our profession; one we can ill afford to become the de facto standard operating procedure.

And I believe that, on the whole, the majority of PR professionals are ethical and have the public’s best interest in mind. While B-M certainly made an ethical lapse in this case, we should give the firm some credit for admitting in a statement that “When talking to the media, we need to adhere to strict standards of transparency about clients, and this incident underscores the absolute importance of that principle.”

All that said, I was a little shocked to read in PRWeek UK a quote from Speed Communications MD Steve Earl that, “Smearing is an integral part of PR.”

I won’t try to get too high and mighty about this topic, but I will say this: Smear campaigns and unethical non-disclosure of clients and/or clients’ intentions are most certainly not an integral part of PR. That type of work is unethical and against most recognized global standards of ethics in the profession, including the PRSA Code of Ethics.

Thankfully, Mr. Earl’s assertions were counterbalanced in the same PRWeek article with a more sane statement by Fraser Hardie, senior partner of Blue Rubion, which just so happens to represent Facebook in the UK. Mr. Hardie made it clear that his firm had no knowledge of the B-M smear campaign and he went further by taking the stance that his firm is not willing to cross the line between advocacy and smearing.

This incident was an embarrassment to all parties involved, and more broadly, to the PR profession. It was also unethical. But I’m confident we’ll learn from this and add additional value to our work by keeping the public’s best interest in mind, even if that comes at the expense of our clients’ wishes.

We just need to take statements like Mr. Earl’s with a fine grain of salt to get through the murk.